You will need a small ring mould or similar, approx 2 inches wide and 2 or 2 ½ inches high. 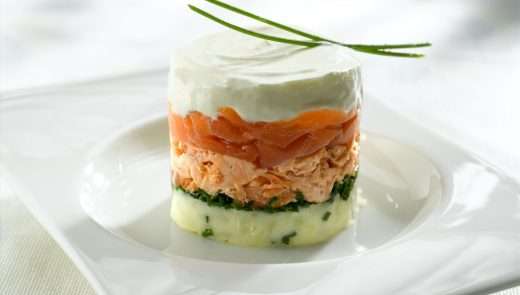 Firstly, peel the potatoes and cut into chunks approx 1 cm square. Boil in lightly salted water until soft. Set a side and allow to cool.

Gently mix potatoes with a little mayonnaise and chives to create a potato salad. Season with salt and pepper.  (The mix should have a few pieces of potato in it rather than being totally smooth)

Place ring moulds onto a plate. Spoon tablespoon of the potato salad into each mould and press down until level.

Sprinkle chopped chives on top of the salad – make sure to cover the entire surface, particularly around the sides, as this will create a nice green band at the end.

Gently flake the barbecued salmon into pieces and mix with a little brandy and enough crème fraiche to bind together. Spoon 1 tablespoon of this mixture into each of the moulds, and press down until level.

Cut the smoked salmon into thin ribbons and layer into the mould. Again press down until level.  (At this stage the salmon should nearly be at the top of the mould)

Spoon in a little crème fraiche up to the top of the mould and smooth off with a knife blade.

Allow to set in a fridge until needed, gently remove from the mould and top with a few small ribbons of smoked salmon and chopped chives. Garnish with salad and serve.

Chefs Notes – You could also use crabmeat instead of barbecued or smoked salmon in this recipe.