Judged by over 400 of the most demanding palates belonging to food critics, chefs, cooks, restaurateurs, producers and a host of food writers and journalists, Great Taste is widely acknowledged as the most respected food accreditation scheme for artisan and speciality food producers.

The comments from the judges for Quinlan’s Organic Smoked Irish Salmon with Atlantic Sea Salt and Dill Pollen cure included:

“This is a thing of beauty with a flavour to match. ”

“What a lovely thing to behold! Great colour, good eating, hard to pass it on to another table – what more can we say! Well done and thank you!”

“This is a beautiful whole side of smoked salmon. The smoke is well balanced and the eat is tender and rich.  Lovely long finish to this salmon which has a very beautiful flavour.”

Quinlan’s Kerryfish, a family business for over 50 years is run by Michael Quinlan and his three sons. Their smokery is based at Renard Point in County Kerry,  on the shores of Wild Atlantic Ocean.

Liam Quinlan – Managing Director says ‘The Quinlan’s team are thrilled with the awards;  we know our products are exceptionally good and to be recognised as the only Salmon Smoker in Ireland and the UK to get three stars is great not just for Quinlan’s but for all our customers, suppliers and Irish Seafood.

Ronan  Quinlan – Master Smoker, continues to remark that it is so reassuring to have Quinlan’s Organic Smoked Irish Salmonso rigorously tested and to have such great feedback, in particular for our new innovative approach using pure Atlantic Sea Salt and Dill pollen to flavour our Organic Salmon.

The Great Taste Awards scheme recognises the best-tasting food and drink available in Ireland and the UK. Over 350 chefs, restaurant critics and specialist retail buyers and other independent food experts were involved in this year’s judging.

With over 50 years of experience the Quinlan family have become the eminent artisan producer of Organic Oak Smoked Irish Salmon. After careful preparation of the each Atlantic Salmon, we use native Irish oak wood chippings to create Organic Smoked Salmon with a truly brilliant flavour, texture and taste. Our Organic Oak Smoked Irish Salmon has achieved a reputation amongst connoisseurs of good food for the excellence of its flavour and for its consistent quality. 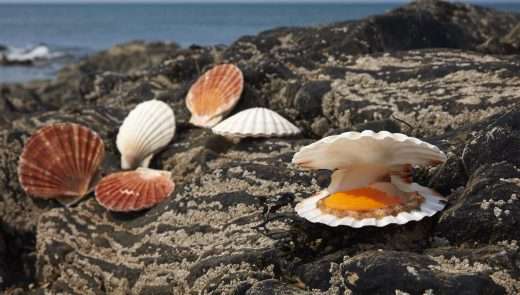 How to Clean Scallops