In the Press – Speciality Food Mag... 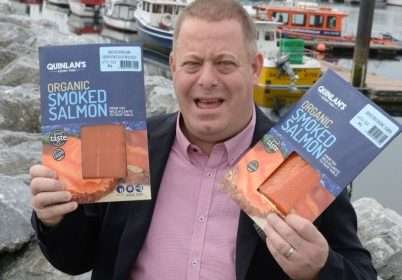 The winners of Blas na h-Éireann Irish Food Awards have been announced, with a fresh crab meat from Kerry being named the country’s Supreme Champion

The awards attracted over 2,000 entries from across Ireland, and prizes were awarded for 100 categories with products having been judged over the course of three weeks by 400 judges.

The Best Artisan Award, sponsored by An Bord Bia, was awarded to Bainne Codhladh of Kanturk Co Cork for its Lullaby Milk, which contains naturally high levels of melatonin to help with sleep, and the Supreme Champion title was given to Quinlan’s Fish, based in Caherciveen, Co. Kerry, for its fresh crabmeat.

Liam Quinlan of Quinlan’s Fish said, “We are absolutely thrilled. We have four premium fish shops as well as three seafood bars supplying our produce direct from tide to table. My father, Michael, started the business 52 years ago and it has been 52 years of hard work since then.

“This is the biggest award and honour we have ever received and I hope it shows that quality always shines through.”

Artie Clifford, chairman of Blas na h-Éireann said, “This year we saw a rise in the entries in several categories like beers, coffee, and dietary-specific products and, once again the judges faced a challenge in selecting the very best.

“For the winners, I wish them very well as they go forward with these awards to their name.”