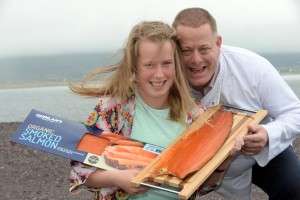 Fifty years of hard work has really paid off for the family-run Quinlan’s Kerryfish — the business struck gold twice at the Great Taste Awards.

Quinlan’s Kerryfish is the only salmon smoker in Ireland and Britain — the smokery is based at Renard Point, Co Kerry.

The Great Taste Awards, run by the London-based Guild of Fine Food, have become the largest and most highly trusted accreditation scheme for speciality food and drink producers.

“Considering that there were over 10,000 entries and that only 130 products were awarded a three-star gold medal, this is a huge endorsement for Quinlan’s,” said managing director Liam Quinlan.

Quinlan’s, established in 1963, is run by Michael Quinlan and his sons Liam, Ronan, and Fintan. Liam said the awards mark 50 years of hard work.

“We really are a work in progress because the business is constantly evolving and an international award like Great Taste really shows that we are doing something right,” said Liam.

He pointed out that it was the second year in a row for Quinlan’ Organic Smoked Irish Salmon to win a Great Taste Award. Quinlan’s master smoker, Ronan, said it was reassuring to have their organic smoked Irish salmon so rigorously tested.

Quinlan’s Kerryfish sells its range of smoked salmon and fresh fish online direct from the smokery and at its shops in Kerry. It offers the smoked salmon at its seafood bars in Cork, Killarney, and Tralee and to a range of fine eating establishments throughout Europe.

Like all of the other three-star winners, the Quinlans will have to wait to see if they scoop the top regional prize at the Great Taste Golden Fork Awards in London on Monday, September 7.