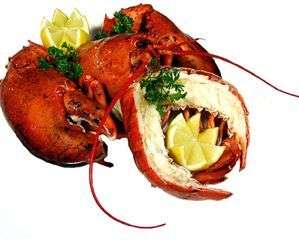 Boiling is one of the simplest ways to cook a lobster, and is probably best for the squeamish that don’t wish to cut up a live lobster with a knife. Some say that you can ‘hypnotize’ a lobster by rubbing the top of its head or its abdomen, thereby pacifying it before boiling. The theory is that the adrenaline produced by a frightened lobster adversely affects the texture and flavor of the meat. I have never seen or tasted any evidence of this, but if you want to cover all possible bases, go ahead and hypnotize your lobster. It is important to select a pot big enough to hold enough water to cover the lobsters completely. Bring the water to a rolling boil and add 1 tablespoon salt per quart of water. Put the lobsters in claws first and begin timing from the moment the water comes back to a boil. To steam lobsters, cook them, covered, in a steamer basket above boiling water. They will need 1 to 2 minutes less, as the steam is hotter than boiling water. For 1 pound: 5 minutes
1 1/8 pounds: 6 minutes
1 1/4 pounds: 8 minutes
1 1/2 to 2 pounds: 8 to 10 minutes
more than 2 pounds: 12 minutes
For more information on our lobster recipes visit these links
Lobster information
Lobster Mayonnasie recipe
Lobster Newburg Recipe
Lobster Thermidor Recipe